Purpose of the Award

New Directions Career Center invites graduates of the Center to apply for our Anne Bostwick Memorial Scholarship! This educational award is for graduates of our signature program, New Directions, who need further their education in order to complete their career goals.

New Directions Career Center (NDCC) established the Anne Bostwick Memorial Scholarship in 1991 to honor the life and work of Anne Bostwick. Anne was employed by NDCC as a career consultant from the late 1980’s to 1991, a role in which she positively affected the life plans of all the women who benefited from her professional counsel and effective support. In response to Anne’s untimely and accidental death, which occurred shortly after Anne received a Master’s Degree, her family, colleagues, friends and the New Directions Career Center agreed to honor Anne’s compassion, intelligence, sincerity, patience, and career success through this educational scholarship.

The Anne Bostwick Memorial Scholarship awards a one-time grant to a woman who has:

Applicants for this award must complete the Bostwick Scholarship Application form and include all requested documentation and essays along with two recommendations and a NDCC staff verification form. Selections are made in August and the award is disbursed in September.

Recipients of the award must be available to attend the Center’s annual Volunteer Reception and Bostwick Award Ceremony. During the reception, the recipient will give a brief speech about their experience at the Center, and how the award will help further their educational and career goals. A representative of NDCC will be available to help the recipient prepare her remarks in advance of the event. 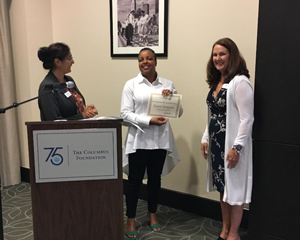 Elana Simpson arrived at New Directions Career Center after having spent 10 years in a successful career that she worked extremely hard at and achieved great success. Her life changed after the birth of her son. After relocating to Columbus, just days before she was to begin a new job, her son had a seizure, multiple surgeries and an illness which forced Elana to leave her career. Elana eventually decided to get back to work as a teacher, later realizing that was not the place for her and that she needed support from New Directions.

NDCC helped Elana give herself permission to take care of herself. Introduced to new ways of finding employment, resume writing, networking and learning to ask for help. She developed an elevator speech that she used over and over until people started to listen to her and assist her in the process of discovering now paths.

Elana says, “I want to be an example of how a woman can have it all and hopefully, help establish a well-lit path for others to follow. New Directions sees unseen women when they are most vulnerable and helps them become seen”.

Elana has enrolled at Columbus State Community College. She is involved with classes and campus organizations as well as volunteer opportunities. Currently studying Project Management and Software Development, the Anne Bostwick Scholarship will help make it possible for her to focus on family, studies and rebuilding skills and reimagining life where she can work smart instead of hard.

2021 will mark the 30th anniversary of the establishment of the Anne Bostwick Scholarship Fund. The fund was started by friends and family members as a way to honor the memory of Anne, a highly respected and beloved counselor at New Directions Career Center (NDCC), who died in a tragic automobile accident.

In recognition of the contributions Anne made to better the lives of women in transition, NDCC would like to offer you the opportunity to make a gift to the Bostwick Scholarship Fund. Although any amount would be welcome, we invite you to consider:

Donations can be made through our secure website. Simply fill out the form and type “Bostwick Scholarship Fund” in the comments section before clicking “submit.”

We appreciate your consideration of this request. Not only will your gift keep Anne’s memory alive, but it will empower other women to achieve their career goals – a cause that was dear to Anne’s heart!